The selection of bass guitars can seem overwhelming to new bass players. How do you distinguish between the different types, and how do you determine which is the right bass for you? In this article we will take a look at some of the most famous brands and models, allowing you to get an overview and perhaps determine which is the right one for you. 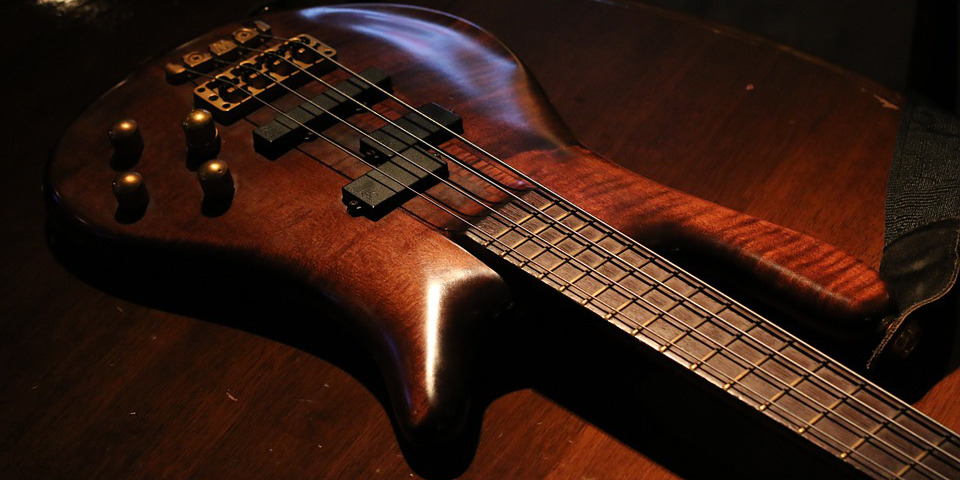 
Fender has always been a big name in the world of bass guitar. Since then, Fender have introduced a number of popular guitars and basses, and are still one of the most famous manufacturers of instruments in the world.

Fender owns the company Squier, who primarily make budget versions of Fender guitars and basses. If you see a Fender bass that you really want, but think its a bit too expensive, there is a good chance that there is a cheaper version made by Squier.

In 1951, Fender introduced their first electric bass, the Precision Bass. It quickly received the nickname P-Bass. It was the first electric bass to gain widespread popularity, og to this day it is one of the best-selling (and most often imitated) bass models on the market. It was designed as a solution to how impractical the double bass had become, as it was heavy, cumbersome, and could scarcely be heard over other instruments if those instruments were amplified.

The P-Bass has always been popular, and countless bass players have used it, including James Jamerson of The Funk Brothers, Roger Waters of Pink Floyd, Nate Mendel of the Foo Fighters and Sting.

In 1960, Fender introduced the Jazz Bass, and just as the P-Bass had been given the nickname P-Bass, the Jazz Bass was quickly named the J-Bass. The Jazz Bass has a brighter and richer tone than the P-Bass, as it has more treble and midrange, and less low end. Although it was originally marketed at jazz bassists, it quickly became popular in other genres such as funk, disco, reggae, blues and progressive rock.

The J-Bass has been continually popular since it was released. Legendary musicians who have favoured the bass include Jaco Pastorius of Weather Report, Larry Graham of Sly & The Family Stone and Flea of the Red Hot Chili Peppers.


Gibson's roots go all the way back to 1902 when the company was started under the name "Gibson Mandolin-Guitar Manufacturing Company" in Michigan, USA. They were one of the first companies to mass produce electric guitars, and though they made several successful hollow-body guitars in the 1930's and 1940's, they really made an impact when they introduced their most iconic model, the Les Paul, in 1952. Since then, Gibson have introduced several other popular models, and they have also branched out and produced several models of electric bass.

Gibson introduced their first electric bass in 1953. It was called the EB-1 (Short for Electric Bass 1), and it essentially looked like a small double bass. It was not particularly successful, and it would be eight more years before they got it right. In 1961, they introduced the EB-3. It was based on Gibson's own SG guitars in terms of design, and it became very popular after it was championed by Jack Bruce of the legendary rock- and blues-trio Cream.

Gibson halted the production of the EB-3 in 1979, but today they produce an SG bass which is very similar to the EB-3 in both design and sound.

In an attempt to compete directly with the popular electric bass guitars that Fender had been putting out, Gibson introduced the Thunderbird in 1963. The design is similar to that of the Gibson Firebird guitar which was released concurrently with the Thunderbird. What set the Thunderbird apart was the "neck-though construction", in which the wood of the nexk went through the entire body of the instrument.

The Thunderbird bass was a favourite of John Entwistle of The Who and Nikki Sixx of Mötley Crüe.

Höfner had already existed for 68 years when they introduced their first electric bass guitar in 1955. This model was christened the 500/1, and in 1961, a young Paul McCartney purchased one from a music shop in Hamburg. It has since become an iconic instrument, and for many it is known as "the Beatles bass". The bass which McCartney purchased that day was stolen in the late 1960's, but he still owns one which he has had since 1963, and which he still brings on tour to this day.


Rickenbacker was founded in California in 1932, and has the distinction of being credited as the first producer of electric guitars in the world. They originally gained their reputation on the clear, ringing sound of their 12-string guitars, but they have also been a popular brand among bass players for many years.

In 1955, Rickenbacker introduced the first of their 4000-series bass guitars. It caused a stir because of its unique design, but as it was only available in a single pick-up version, bassist quickly began to request a version with two pick-ups. Rickenbacker gave the customers what they wanted, and in 1961 they released the 4001, which has laid the foundation for all subsequent 4000 models.

Although the 4000-series was not made specifically for heavy music, it has become a favourite among bass players within this type of music. In particular, Lemmy Kilmister of Mötorhead was known for playing a selection of 4000-series models throughout his career, and both Geezer Butler of Black Sabbath and Cliff Burton of Metallica have played 4000-series models.

How To Find Relevant Music Education


Do you want to learn how to play the bass? Maybe you already know, but you want to improve your abilities? We have lots of talented and experienced teachers all over the country. Find a teacher in your city today!

Learn about the instruments