Composers and their Music: Olivier Messiaen

2. An Overview of Messiaen's Musical Language, by Gareth Healey

In 1944, Messiaen published his Technique de mon language musical, a treatise explaining his musical language up to that point, which appears to be a unique synthesis of various disparate elements. Since nearly all his works are based on a formulated musical language, a thorough examination of it is vital in forming a complete understanding of them. With the exception of his later, more detailed, excursions into birdsong and serialism, all his techniques are manifest in Vingt regards sur l'Enfant-Jésus, and in certain cases, such as the third Regard, 'L'échange', dominate individual pieces. Thus, the piano cycle has been chosen to provide the majority of examples in this section. 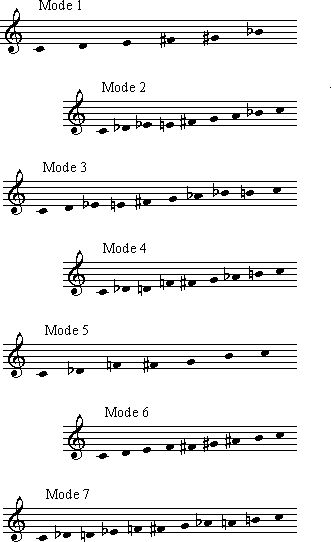 To hear these modes, click here.
Although Messiaen was the first composer to categorise and name these modes, the origins of only Modes 1 and 2 can be traced further back. (It should be noted that these have nothing to do with other modes of India, China, Ancient Greece and plainchant.) Mode 1, uniquely among the seven, does not contain a semitone step; composers such as Glinka and Liszt had used this whole-tone scale as early as the 1830s, but not in such a systematic way. Its presence in a series of modes of limited transposition is explained by the fact that it can only exist in two transpositions:
First transposition - C, D, E, F#, G#, A#
Second transposition - Db, Eb, F, G, A, B
The limitations provided by the whole-tone scale, allied to the fact that it had been used so often before, meant that Messiaen used it less than the remaining modes. (For this same reason it was deliberately avoided by Ravel.) As Messiaen explained:
Claude Debussy, in Pelléas et Mélisande, and after him Paul Dukas, in Ariane et Barbe-Bleue, have made such remarkable use of it that there is nothing more to add. Then we shall carefully avoid making use of it, unless it is concealed in a superposition of modes which renders it unrecognisable (1944, 59).
Liszt, Rimsky-Korsakov, Scriabin, Debussy, Ravel and Stravinsky had also used Messiaen's second mode: Rimsky-Korsakov employed it more simply as an octatonic scale of alternating tones and semitones, whereas its use by Stravinsky was more frequent and systematic. Similarly, it is Messiaen's favourite and thus the most used of the seven. First used in the fifth Prélude, Les sons impalpables du rêve (1929), the mode consists of four symmetrical overlapping groups of three notes, each group containing a semitone followed by a tone. This allows three transpositions thus:

Messiaen compares the second mode to the chord of the diminished seventh (which it outlines), as it too has only three transpositions. Mode 3 is transposable four times and contains different groupings from those in Mode 2; three symmetrical groups of four notes each have the interval of a tone followed by two semitones. Its transpositions work in a similar way to the examples shown above. Mode 4 differs from the previous three since, as the following example shows, it contains only two symmetrical groups. Therefore, a total of six transpositions is possible.

Modes 5, 6, and 7 work in the same way; these four modes form a similar group, but, due to their limitations, they were favoured less.

These are palindromic rhythms. For example:


Non-retrogradable rhythms also appear in a more complicated compound form, where individual values within the rhythm can be combinations of two or more notes or chords tied together. There are examples in Messiaen's music of rhythms that may not appear at first to be non-retrogradable, but in fact are. These compound rhythms produce a more subtle effect than in the above example and, as is the case with many of Messiaen's techniques, become less noticeable when incorporated into larger musical structures. The following example is taken from Regard de I'Esprit de joie, (bar 33): 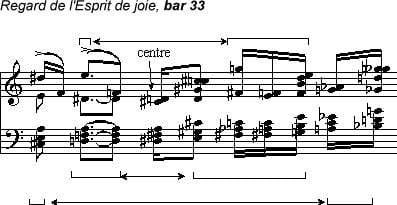 An added value is where an addition to a rhythm makes its value irregular. Much favoured by Messiaen, this technique allows him to build prime-numbered groupings from an even-numbered rhythmic cell, making Messiaen's rhythms both flexible and unpredictable. A very common occurrence of added value is shown below.

These are similar to normal canons, but the element of pitch is not involved. There can be two or more entries, with each a prescribed distance apart. To qualify as a rhythmic canon, each entry must have the same rhythm, but not the same pitch. Entries in the following example are at the distance of a crotchet.

These ostinato figures repeat a set rhythm as many times as is required; the rhythm of the pedal can be, and often is, entirely independent from any of the other rhythms involved. The following example has four pedals, marked A, B, C and D. 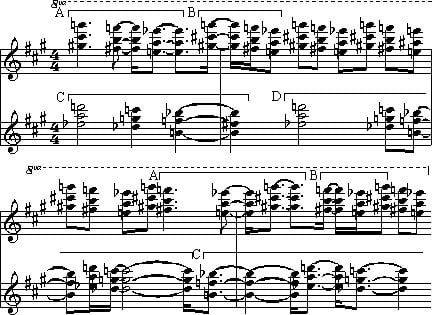 This technique derives from Debussy. Messiaen mentions finding in Debussy 'appoggiaturas without resolution, of passing notes with no issue .... foreign notes, with neither preparation nor resolution, without particular expressive accent, which tranquilly make part of the chord, changing its colour, giving it a spice, a new perfume .... they are added notes' (1944: 47). The added sixth and augmented fourth are important parts of Messiaen's language (the chord of F-sharp major with an added sixth forms the harmonic basis of the Vingt regards), so his explanation is worth quoting in detail. The first stage is to add a sixth to a chord:

Play
A seventh and then a ninth can be added:

Play
Messiaen then argues that the next note in this harmonic sequence should be an F sharp:

Play
The final result is a chord containing a sixth and an augmented fourth that resolves to a chord with an added 6th:

Messiaen uses this technique to develop a small cell through the alteration of pitches by various means. Some pitches rise, some fall, and some remain the same, a technique that can be found in the fugal subject of the sixth Regard, 'Par Lui tout a été fait', but its most extended use occurs in the third Regard: 'L'échange', which is almost entirely based on this technique. The octaves in groups of three on the lowest stave progress using agrandissement asymétrique. The following shows the start of the procedure:

Messiaen had a life-long interest in birdsong: he was an expert amateur ornithologist and used this knowledge in his composition. Messiaen was not the first composer to try to represent birdsong in pianistic terms, and there are well-known examples that pre-date Messiaen by many years such as Liszt's second Legend - 'St Francis of Assisi preaching to the birds.' However, Messiaen's approach is different in that his quest for accuracy is far greater since he wants to produce a true recreation of nature rather than merely hinting at it. Messiaen's style of birdsong writing developed throughout his career, demonstrated by comparing an earlier use of birdsong in 'Regard des Hauteurs' - the eighth of Vingt regards sur l'Enfant-Jésus - with any of the pieces from Catalogue d'oiseaux (1956-8).

In Technique de mon langage musical, Messiaen explains that the thirteenth-century Hindu theorist Carngadeva produced a table of 120 deçi-tâlas that was reproduced in the Encyclopédie de la musique et dictionnaire du conservatoire, (edited by Lavignac and La Laurencie and published in Paris between 1913 and 1931 [Part 1, Volume 1, pp 301 ff]). Messiaen did not carry out any extensive research into Indian music in general, but was fascinated nevertheless by these, and their possibilities. They became one of the fundamentals of his musical language and he made extensive use of them in all aspects of his music.

Messiaen's interest in Greek metres began during his student years at the Conservatoire. His music history teacher during this period, Maurice Emmanuel, had an extensive knowledge of Greek metres and wrote an article on the subject in the Encyclopédie de la musique et dictionnaire du conservatoire; as with the Hindu rhythms, this book was Messiaen's prime source on the subject. The bases of these metres are the two values which combine to each make one:

The augmentation and diminution of rhythms are procedures used by Messiaen to vary and add interest to rhythms and thus make them less predictable. In Technique de mon langage musical, Messiaen states that J. S. Bach used these methods, although in the simplest ways. The following shows how simple augmentation works:

Simple diminution and diminution by withdrawal of the dot work in the opposite way to the above examples.

The concept of personnages rythmiques is derived from Stravinsky's The Rite of Spring. Each personnage is a short rhythmic cell that has certain constituent elements, which include mobility and immobility, and for which their juxtaposition is the basic idea. Although a mobile cell is one that can either increase or decrease in value, immobile cells always remain constant. Messiaen noticed how Stravinsky manipulates rhythmic cells in The Rite of Spring (particularly in the 'Sacrificial Dance', which is the most complex section), and compared the various cells to theatrical characters. In his analogy, Messiaen compares a cell which increases in value to a character who dominates the scene (the one who does the acting), the cell which decreases to a character who is acted upon, and the immobile cell to a motionless character who observes the scene. This led to Messiaen giving the technique the name personnages rythmiques. Although in Vingt regards there is no clear example of this technique, its influence can be seen throughout, in passages that contain at least two rhythmic cells, where one increases while the other decreases. One example occurs in 'Par Lui tout a été fait'. In Vingt regards, Messiaen employed Stravinsky's initial concept; however, later works, such as the Turangalîla-Symphonie, employ a more developed approach. For this reason alone, personnages rythmiques must be considered a vital part of Messiaen's musical language.

These techniques take on an overall cohesion when their relationships are examined. In many instances a technique can be applied both harmonically and rhythmically (or vertically and horizontally), producing paired relationships. They are as follows: