If you have just started playing the guitar, the variety of makes and models can seem overwhelming, especially when it comes to electric guitars. In this article we will take a look at some of the most famous brands and models, so that you can get an overview, and perhaps even decide which guitar is right for you.

If you have never played guitar before, we would suggest that you read this article first. 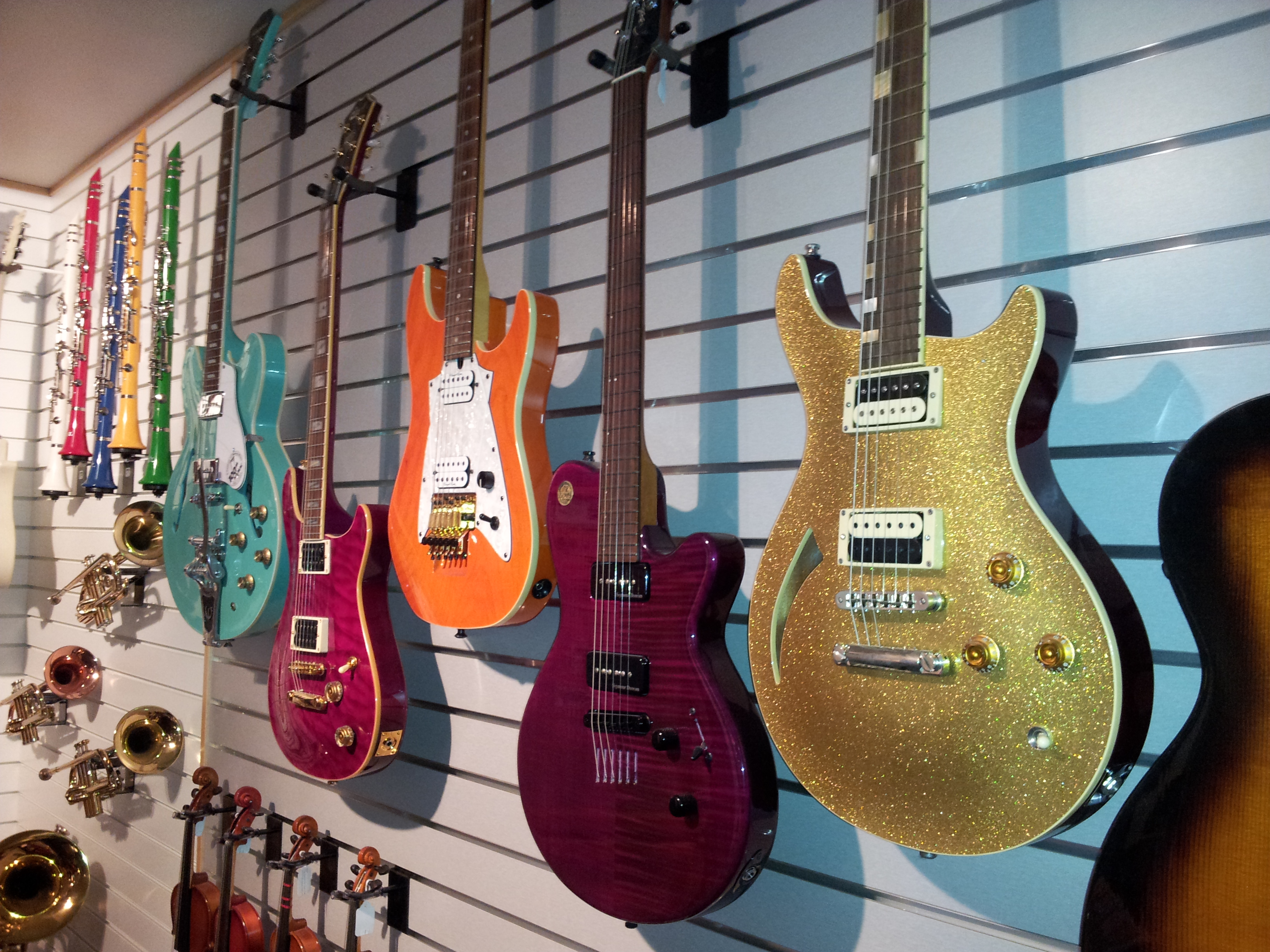 Gibson's roots go all the way back to 1902 when the company was started under the name "Gibson Mandolin-Guitar Manufacturing Company" in Michigan, USA. They were one of the first companies to mass produce electric guitars, and though they made several successful hollow-body guitars in the 1930's and 1940's, they really made an impact when they introduced their most iconic model, the Les Paul, in 1952. Since then, Gibson have introduced several other popular models, and for many people, Gibson is what they think of when they think of electric guitars.

Gibson also owns the company Epiphone, who have also produced a number of famous guitars throughout the years. Today they primarily produce budget versions of Gibson guitars. If you like the look, feel and sound of a Gibson guitar, but find them a bit too expensive, then you might consider investing in an Epiphone first. 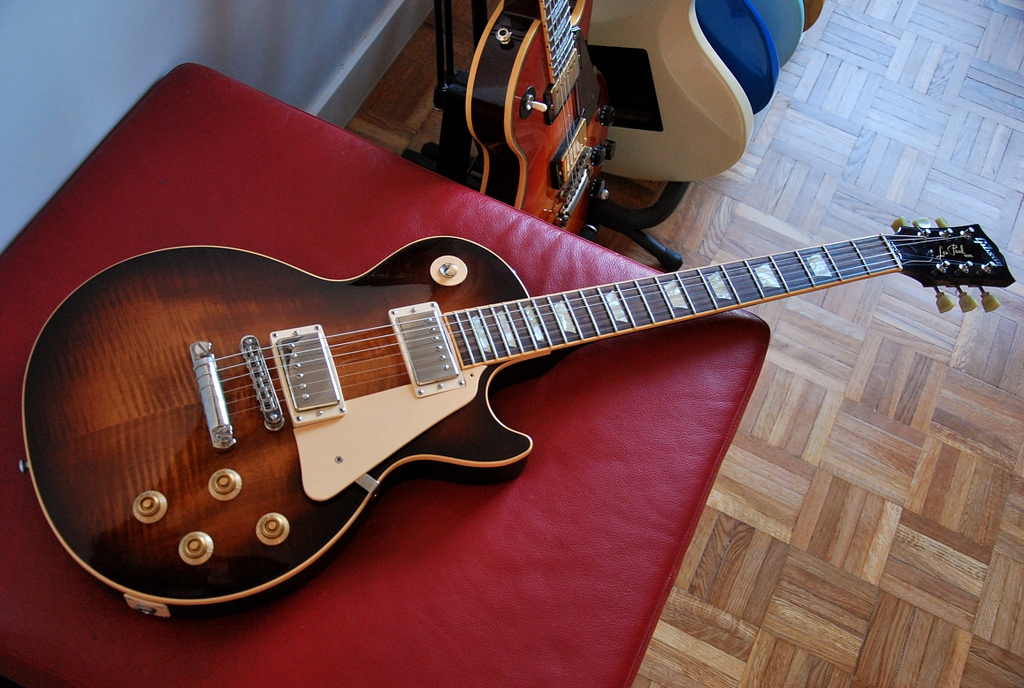 Few instruments are as iconic as the Gibson Les Paul. Named after the legendary jazz guitarist of the same name, it has since gone on to become primarily associated with rock music. Legends like Slash of Guns'n'Roses, Jimmy Page of Led Zeppelin and Joe Perry of Aerosmith swear by the Les Paul.

The Les Paul is not used exclusively in rock music, however. The guitar is famous for it's warm tone and long sustain. 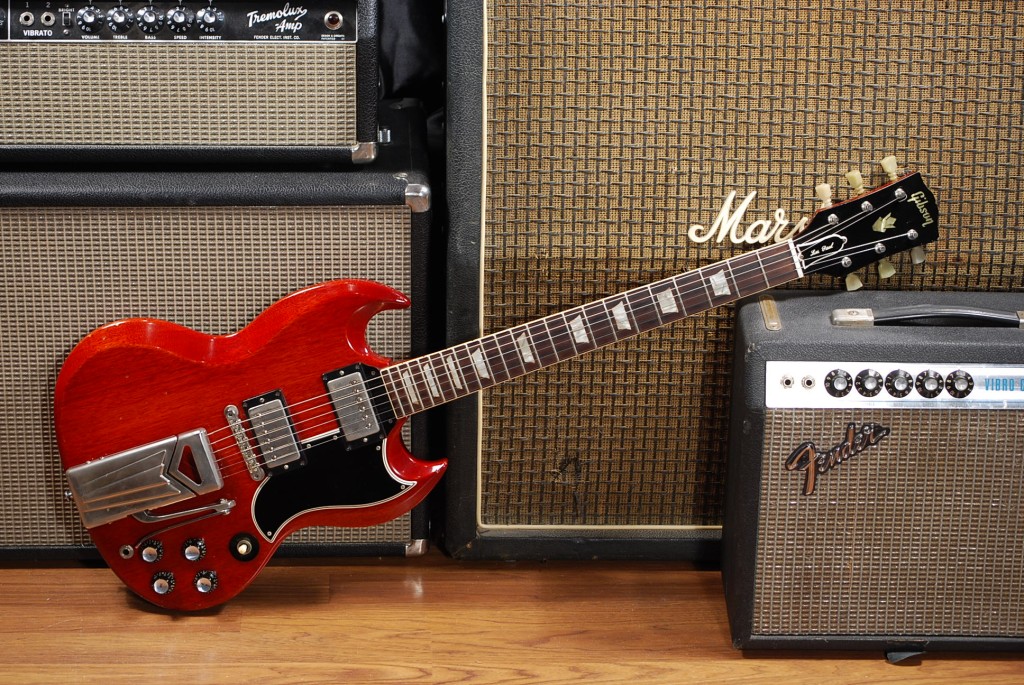 The SG (which stands for Solid Guitar) was introduced in 1961, and was originally marketed as a new version of the Les Paul. Les Paul himself was less then impressed with the guitar, however, and requested that his name be taken off it. Not everyone shared mr. Paul's opinion however, and the SG has gone on to become one of Gibson's most popular guitar models.

If you have ever seen a picture of Angus Young, the lead guitar player of Australian rock legends AC/DC, the odds are that he was holding his trusty SG. Similarly, Tony Iommi of Black Sabbath has played SG's almost exclusively since the very earliest days of Sabbath.

The SG is both thinner and less heavy than the Gibson Les Paul, which is worth taking into consideration when choosing a guitar.

While ES-335 may not be the most graceful name in the world, the guitar to which it is attached is very graceful indeed. Gibson introduced the ES-335 in 1958 in an attempt to make an electric guitar with the same warm tone as a hollow-body guitar, but without the same tendency to produce feedback. The ES-335 is popular in rock, jazz and the blues, and blues guitarist B.B. King is known for his jet black ES-335 which he has christened Lucille.


When it comes to electric guitars, Gibson and Fender have always been considered rivals. Fender started in 1943 in California, and are credited with creating the first mass produced electric guitar - The Telecaster. Since then Fender have introduced a number of popular guitars and basses, and among their most famous models are the Stratocaster, the Jaguar and the Jazzmaster.

Similarly to how Gibson owns Epiphone, Fender owns the company Squier, who primarily make budget versions of the most popular Fender models. 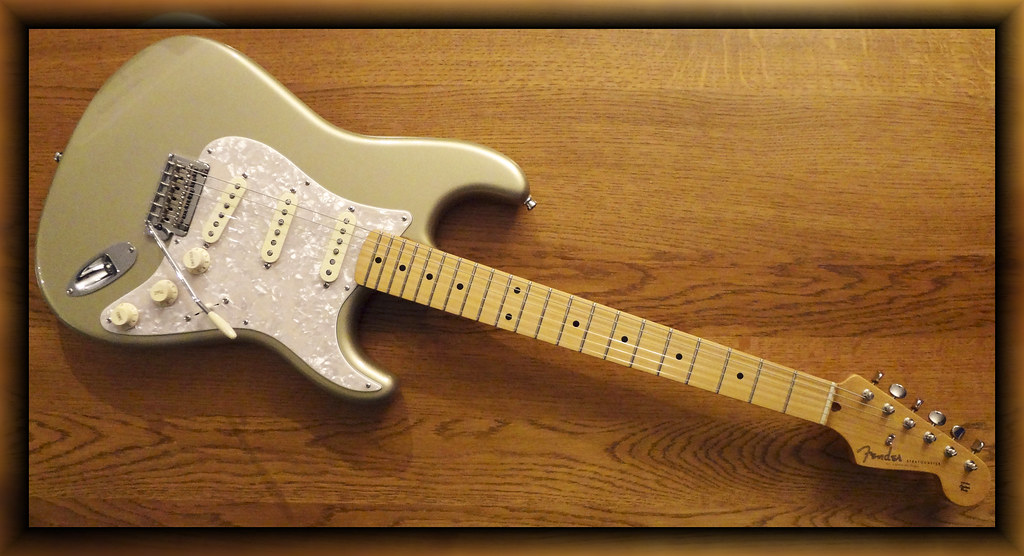 For decades, a single question has divided guitar fans across the world: Which is the more famous guitar, the Gibson Les Paul or the Fender Stratocaster? The Stratocaster was introduced in 1954, and its iconic shape has been copied endlessly ever since. The Strat, as it is affectionately known, is very versatile, and it is used in practically ever genre of music. Rock, pop, country, blues, reggae, metal - It can do just about anything!

The list of famous guitar players known for favouring the Stratocaster is practically endless, but top of the list would probably be Jimi Hendrix, Eric Clapton, David Gilmour of Pink Floyd and John Mayer.

The Telecaster (Affectionately known as the Tele) was introduced in 1950, and it such it is the oldest model of electric guitar to still be mass produced. The Telecaster is actually a variant on the very first mass produced Fender guitar, the Esquire, which only had a single pickup. The Telecaster was originally named The Broadcaster, but seeing as Gretsch already had a series of drums under the name Broadkaster, Fender were forced to come up with a new name. In 1951, it was given the name Telecaster.

The Telecaster is used in just about all genres of music, and Keith Richards has been the weapon of choice for Keith Richards of The Rolling Stones for decades. The Telecaster is also very popular in indie rock, where guitarists like Johnny Marr of The Smiths, Jonny Greenwood of Radiohead and Graham Coxon of Blur have favoured the classic model. 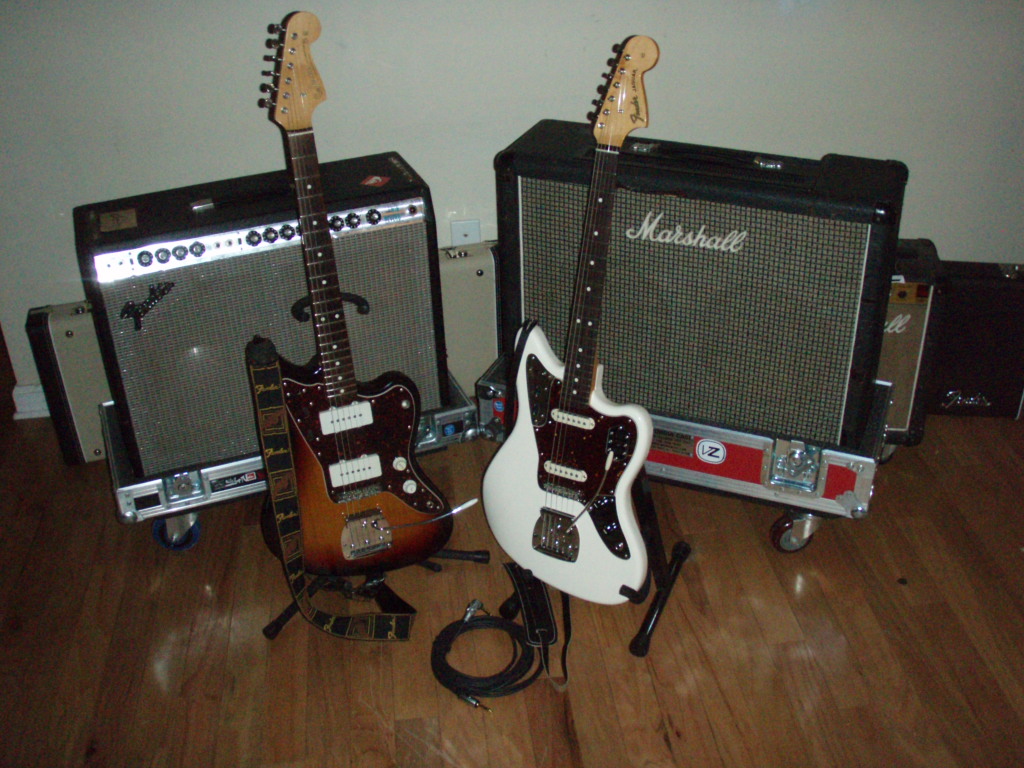 Although they do differ somewhat in sound and construction, the Fender Jaguar and Jazzmaster models are often mentioned in the same breath. The Jazzmaster was introduced in 1958, and though it was originally marketed towards jazz musicians, it was the surf rockers who truly adopted the guitar as their own. Similarly, once the Jaguar was introduced in 1962 they took a shine to that model as well. The Jazzmaster and the Jaguar could not quite measure up to the success of the Stratocaster and the Telecaster however, and production of the two models was halted in 1975.

Thankfully, the story does not end there. Towards the end of the 1970's the two models became very popular among punk guitarists, and in the 1980's they became firm favourites of indie acts such as Elvis Costello, Sonic Youth, Dinosaur Jr. and My Bloody Valentine.


Gretsch was founded in New York by a german immigrant in 1883, and originally they produced banjoes, tambourines and drums. In the 136 years which have passed since, Gretsch has become one of the most well respected American manufacturers of instruments, and they are particularly famous for their large hollow-body guitars. The company had a big supporter in the popular country musician Chet Atkins, known in the industry as Mr. Guitar, and the company even started selling a guitar with his name on the pick guard - The Gretsch 6120.

In 2002, Gretsch entered into a partnership with Fender, who are now responsible for the development, distribution and sales of Gretsch instruments. Gretsch guitar are still in production today, though primarily in Asia, so if you want a genuine American Gretsch you will have to purchase one of their "Custom Shop" models.

Gretsch introduced their 6120 hollow-body electric guitar in 1955, and it was an instant success, in no small part thanks to the endorsement of Chet Atkins. The guitar has been in production continuously ever since, and while it has never achieved the popularity of the most popular Gibson and Fender models, it has many dedicated fans, particularly in country and bluegrass music.

In addition to Chet Atkins, both Eddie Cochran and Duane Eddy were early adopters of the guitar, and in the 1960's Gretsch were faced with an enormous demand for their guitars after George Harrison of The Beatles had performed on American television playing two of their other models, the Country Gentleman and the Tennessean.


Ibanez was founded in 1957 in Nagoya, Japan, and their first electric guitars were so reminiscent of Gibson and Fender guitars that Gibson ended up suing them. Luckily, Ibanez had some original designs up their sleeves, and and they have since gone on to become one of the most popular brands of guitar amongst heavy metal guitarists. Ibanez were the first company to mass produce 7- and 8-stringed guitars, and they are famous for their fast necks and reliable tremolo systems.

The most famous advocate of Ibanez guitars has to be Steve Vai. In 1987 Ibanez and Vai started a partnership which led to the development of some of the company's most popular models of electric guitar.

The Ibanez-Vai partnership would prove to be a very advantageous one for both parties, and in 1987 Ibanez introduced two of their most popular models: The JEM and the RG. Both models are what is known as "superstrats", which means that their designs are based on the classic Fender Stratocaster, but with a more aggressive design, more frets on the neck, and humbucker pickups.

The JEM was directly designed per Steve Vai's specifications, and to this day his primary guitars are still JEMs, both live and in the studio. The RG series, originally called Roadstar, were developed concurrently, and have a lot in common with the JEM. It is the most popular Ibanez guitar to date, and exists in many different versions.

Rickenbacker was founded in California in 1932, and they have the distinction of being credited as the first producers of electric guitars in the world. Their guitars have a particular ringing sound, and their 12-stringed guitars helped define the sound of many classic 1960's bands.

The Rickenbacker 360 was introduced in 1958, and although it was popular, it was the 12-stringed version, the 360/12, which became legendary. George Harrison used this guitar on many early Beatles recordings, and helped make it a sensation. Roger McGuinn of The Byrds was famous for using a 370/12, which is almost identical to the 360/12, but has three pickups instead of two. The Byrds would base almost their entire sound around this instrument.

In the years since, guitarists like Tom Petty, Peter Buck of R.E.M. and Johnny Marr of The Smiths have kept the ringing sound of the Rickenbacker alive.


B.C. Rich was founded in California in 1969, and their trademark quickly became their attention grabbing designs. In particular, their models The Bich, Mockingbird and Seagull were known for their alternative (and some may even dare to call the impractical) body shapes.

B.C. Rich guitars are very popular among metal guitarists, and if you have ever seen a guitar player on stage who looks like he's trying to tame an overgrown bat, then he was very likely playing a B.C. Rich guitar. 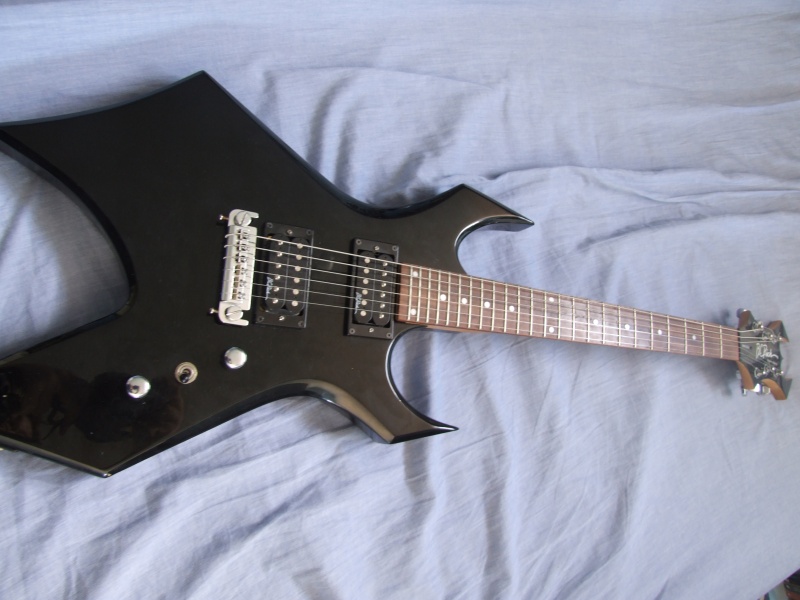 Some guitars, such as the Telecaster, are built to be versatile, and can be used in most genres. The B.C. Rich Warlock is not one of these guitars - It was made for the heaviest of heavy metal. It was introduced in 1981, and it became a firm favourite of aggressive acts such as Sepultura, Motley Crüe and Lita Ford.

Although it is most commonly available in jet black, some guitarists have had theirs made in custom designs. Paul Stanley of KISS was famous for playing a Warlock which was painted to resemble a cracked mirror. The guitar is still very popular today, in large part thanks to being a favourite of Kerry King of Slayer.

Find Guitar Lessons Near You


Do you want to learn how to play the guitar? Maybe you already know, but you want to improve your abilities? We have lots of talented and experienced teachers all over the country. Find a teacher in your city today!

Learn about the instruments