In the article below we will explain the circle of fifths to you, a unique and a very handy tool which can help you in various ways when it comes to music:

Learning To Decipher The Circle Of Fifths 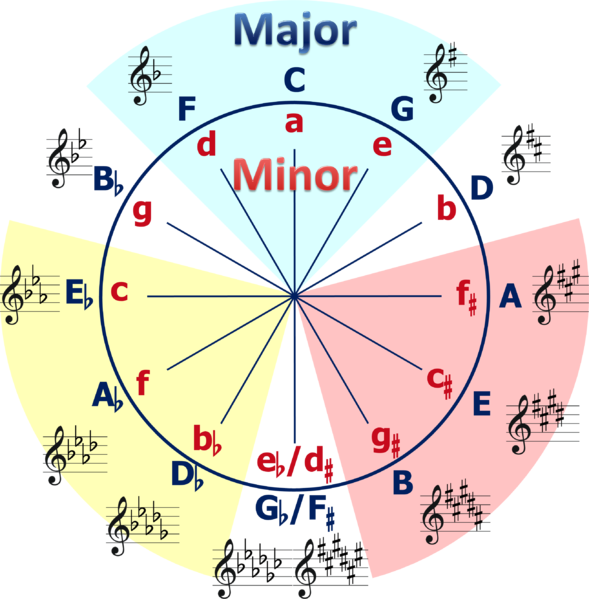 Before we begin, take a look at the outer most edge of the circle of fifths. Do you see the little bit of musical notation by each key? That is called the key signature. In the circle of fifths, the purpose of it is to show you which notes in the key are either sharp or flat. This is essentially important to learn if you wish to play from sheet music. Nonetheless, it is a piece of knowledge that good to know in any case. You may come across a piece of music that you want to play, where you only have the key signature. Knowing how many sharps or flats each key contains will let you determine the key fairly quickly. Easy as that!

Major And Minor Chords on the Circle

Once you know which key you are playing in, find the tonic chord on the circle of fifths. If you wish to play a song in the key of D major, then the chord you are looking for is the D major chord. In other to determine the chords in this key, simply look at the chords in the near vicinity of the tonic chord. Furthermore, moving one step counter-clockwise will land you at the G major chord. Vice versa, going one step clockwise from D major will land you at the A major chord. These are, respectively, the fourth and fifth chords of the key of D Major.

Furthermore, there is also a seventh chord in every key, which is called a diminished chord. These are not played very often, however if you want to find it, simply move two steps clockwise from the sixth chord of the key. And in this case, that would mean moving two steps clockwise from B minor, which would land you at C#. The diminshed version of this chord would be your seventh chord. So the full list of chords for this key would be:

Transposing a song to a different key

Now that you know how to find the chords of a key, you can easily transpose a song with the circle of fifths. Let's say that you want to transpose a song from the key of C major to the key of D major. The song contains the chords C major, G major, F major and A minor. You know that C major is the tonic chord. Using the circle of fifths, you look at where each chord is in relation to C major. F major and G major are either side of C major, and A minor is just on the inside of the circle. When you move to the key of D major, all you have to do is take the chords on either side of the new tonic chord, D major, and the chord directly inside the circle. This gives you G major, A major and B minor.

Keep repeating the process mentioned above in order to transpose songs to different keys, using the help of the Circle of Fifths.


Do you want to learn music theory? Maybe you already know, but you want to improve your abilities? We have lots of talented and experienced teachers all over the country. Find a teacher in your city today!